1. Pampers | A newborn journey of firsts

This Saatchi & Saatchi-created ad showcasing the “firsts” that take place between a parent and a newborn baby garnered over 1.8 million views, proving that the appeal of babies has not yet had its day.

The first of the vlogger hits. This OMD-created second episode of the Pepsi Max sponsored series of “Genius Sports Mash-ups” shows YouTube creators Miniminter and TBJZL, or Simon and Toby, team up with footballers including Behzinga in a zip-line shoot-out.

Following closely behind is the first episode of the series, also created by OMD, where the duo team up with basketball players to mix the sport with go-karting.

The fourth video on June’s list, created by user PewDiePie and OMD, is the second of three winning fan fiction submissions from a contest sponsored by Mountain Dew.

The “When stuff sucks, make it right” speech by Three’s fuzzy purple friend Jackson took fifth place. The ad was created by Wieden+Kennedy and Mindshare.

As part of its Happiness Week, a fixture in the brand’s “Choose Happiness” campaign, Coca-Cola GB asked vlogger Sprinkle of Glitter to show fans the things that make her happy in this video, created by MediaCom.

The vlogger has over 2.1 million YouTube subscribers and produces weekly fashion and style videos.

The launch film for the news BMW 7 series, created by KBS+ and Universal McCann, garnered over 1.9 million views for showcasing the car’s features in an epic cinematic style.

Parenthood strikes again in the June top 10 with this Dove Men+Care film for Father’s Day showing real moments where men find out they’re going to be fathers.

The video, created by Havas Helia and Mindshare, is the most viewed of the top 10, receiving over 16.7 million eyeballs.

Levi’s also went down the vlogger route, partnering with YouTuber Inthefrow  to promote her visit to the Primavera festival in Barcelona where she wore a personalised outfit from the brand.

Keen not to fall foul of the Advertising Standards Authority, the vlogger stated that the advertorial was paid for and linked to a site where fans could purchase her outfit.

After claiming to “personally tailor our customers’ dream holidays for over 21 years”, Travel Counsellors took the last spot on the top 10 with their emotive first ever TV ad, created by Thinking Juice. The spot is set to a soundtrack of “Dream a little dream” and ends with the tagline: “With us…It’s personal”.

The list is determined by an algorithm that factors in paid views, organic views and how long people watched the video for. 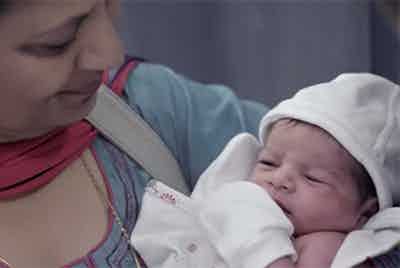 Parenting and Irn-Bru appeared alongside Champions League Football on the leaderboard for the top ten YouTube ads in May.