The restaurant chain ran a carefully staged advert in the run up to the event starring former Olympic speed skater Apolo Ohno and Sochi 2014 snowboarder Torah Bright. The ad ran ahead of the IOC’s designated “blackout period”, which runs from 30 January to 26 February and features a raft of imagery associated with the event. Figure skaters, an ice rink and a snowboarder are shown in a series of scenes that conjure up an association with the Games despite no overt reference being made. The move is not likely to sit well with Olympic sponsor McDonald’s, which is said to be paying around $200m (£119m) for an eight-year deal to be the events’ official restaurant.

The lighter company was one of the first to ambush the event last October when it made the most of an accident during the Olympic Torch Relay. When the torch was blown out by wind, a plain-clothes police officer reportedly relit the torch with a Zippo lighter. The fleet-footed brand posted a picture of the incident on its Facebook page and took credit for relighting the Olympic Flame with the hashtag #ZippoSavesOlympics. The stunt did not sit well with Olympic chiefs who threatened legal action if the image of the torch was not removed. Zippo obliged with a new strapline: “Zippo: Perfect for all winter games. Wink. Wink”.

The coffee brand has managed to establish a presence in the non-sponsor blackout zone that is Sochi courtesy of US broadcaster NBC. It has erected a Starbucks pop-up bar in its media center on the grounds it is serving its 2,500 on-site employees, the company revealed to the Wall Street Journal. While the center is not open to the public, it treads a fine line of breaking strict regulations in place to prevent non-sponsors from associating themselves with the event. 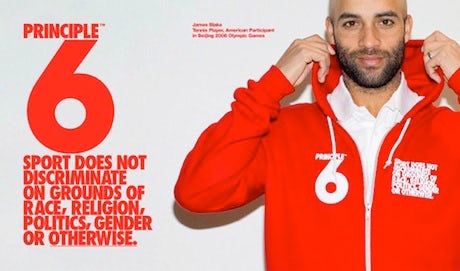 The retailer launched a clothing and merchandise range in protest of Russia’s anti-gay laws. Proceeds from the “Principle 6” range, inspired by the section of the Olympic Charter stating “Sport does not discriminate on the grounds of race, religion, politics, gender or otherwise”, will go to Russian lesbian, gay, bisexual, and transgender advocacy groups. The range has tied the brand to the Games and gained support from Sochi 2014 alpine skier Mike Janyk as well as former Olympians Greg Louganis and Cameron Myler.

The snowboard manufacturer’s flashed across screens around the world earlier this month when eight of the twelve finalists in the men’s half-pipe used its boards. Other ski manufacturers have also benefited from increased air time on the slopes in the wake of pressure from IOC organisers to cover the logos up. Athletes are allowed to use equipment of their choosing, a situation that has benefited serial ambusher marketers Nike in the past

I have been going through a bit of an existential crisis lately. I suppose it is only to be expected at my age. But my recent choice of bedtime reading has not helped.