Channel 4’s bold campaign to get the nation to “Stand up to Cancer’ struck a chord with viewers ahead of the broadcaster’s night of fundraising tonight (17 October). The animated film humorously flips the disaster movie genre on its head showing a world gripped in the panic of lethal outbreak only for it to be revealed the world belongs to cancer and it is the humans causing the chaos.

2.Herbal Essences: The truth about dating

“Everything feels better when you Get Naked”. That’s the message hair care products maker Herbal Essences is trying to get across to viewers of its latest ad. Following a young twenty-something woman on a date, the film sheds light on the differences between what women say and what they really mean. In the end, the protagonist is happiest when she strips the pretense, neatly linking to Herbal Essences Clearly Naked’s claim it helps women show off their natural beauty.

Walkers Crisps gave unsuspecting Londoners a surprise recently by putting brand ambassador Gary Lineker inside a Twitter vending machine at a bus stop. The reactions range from surprised to delighted as people slowly work out they need to tweet to receive a free pack of crisps.

5.Ikea: Experience the power of bookbook

Ikea jumped on the Apple-sniping bandwagon with an ad touting its latest catalogue as the coolest, sleekest new gadget on the market. “The 2015 Ikea catalogue comes fully charged, and the battery is eternal”, says chief design guru Jorgen Eghammer. He adds that the catalogue is not a digital book or an e-book but a bookbook, which has “navigation based on tactile touch technology that you can actually feel.” 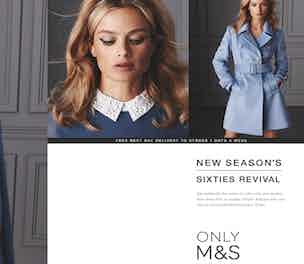 Marks & Spencer is launching its first unified brand campaign as it looks to use its quality credentials to create a halo effect that it hopes will convince more shoppers to buy across the full range of its business.