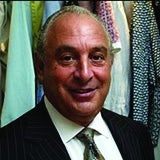 Turnover reached £2.8bn, up from £1.9bn last year, driven, the company says, by a “strong year” from Topshop and Topman.

Despite the gains, Sir Philip says that January’s increase in VAT, wage inflation and the increasing cost of raw materials leave him “cautious” over the company’s prospects for the current year.

Like for like sales in the UK for the eleven weeks since the end of August increased 1%, the company adds.