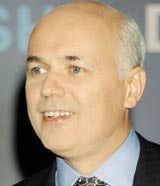 The card, which will be available to the party’s 90,000 members, will be unveiled on July 17 by Conservative Party chairwoman Theresa May.

The Tories have also teamed up with breakdown service RAC and internet service provider BT Openworld to offer discounts to members.

A spokeswoman for the party says: “This will be our first major comprehensive package of affinity deals. We will offer our supporters and members special deals on credit cards, internet access, roadside assistance and insurance. These deals will save supporters money and help to broaden the party’s fundraising and membership base.”

Earlier this month, Tory leader Ian Duncan Smith launched a direct marketing campaign, taking a swipe at Tony Blair’s “tax lies”. It used a picture of the Prime Minister as Pinocchio. The campaign was created by Edge Communications (MW July 10).