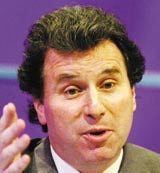 TheÂConservativeÂPartyÂis proposing to cut COI Communications’ £307.5m advertising and marketing budget by more than half and plans to spend the money on police, doctors, nurses and teachers.

Shadow Chancellor Oliver Letwin’s pledge to slash its budget by £200m comes in the same week as the Conservative Party launches its election manifesto.

In a statement exclusive to Marketing Week, he says: “[Prime Minister] Tony Blair is wasting £307m a year on advertising, sponsorship and other PR activities – nearly three times what was spent in 1997. Advertising has more than tripled over the same time period, increasing from £60m in 1997 to 1998 to £189m in 2003 to 2004. This is another example of how Mr Blair’s bloated government is spending and wasting taxpayers’ money.”

SMG has appointed MT Rainey as non-executive director on the group’s board.

Voca, the company that oversees Direct Debit, has promoted Ana Bolitho to the newly created post of brand and communications manager for corporate media relations. The role was created as Voca, rebranded from BACS last December, looks to expand into new markets.