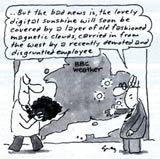 In an age when science has done so much to rob nature of her mysteries, meteorology alone permits the Earth to keep its age-old secrets and spring its surprises.

For all their data – painstakingly collected from high altitude balloons, flying aircraft and satellites, and fed through computers, measured with anemometers, and processed into charts – the weather forecasters retain an enduring and enchanting inaccuracy. True, they may get the pattern more or less right, but the timing is usually awry, which makes a day at the cricket or a picnic outing as hit or miss as it was before the invention of the barometer.

Lacking predictive value, weather forecasts are simply another form of entertainment – which is why they lend themselves so perfectly to the frivolous medium of television, within whose artificial world nothing is ever quite as it seems and all things great and small are etherised alike and quickly forgotten.

Independent television, whose eye for the silly and trifling is more practised by nature than the BBC’s, was quick to cast meteorology as a form of pantomime. Hence the weather girls: blonde, long-legged and bubbly, they accorded gloss-lipped bafflement in equal measure to both occluded front and autocue. Then there was the forecaster who leaped about a floating map of the British Isles while a rapt nation willed him to miss his footing between the bobbing polystyrene coasts of Northern Ireland and the mainland. And Kelvin Mackenzie used his spell in cable TV to pioneer weather bulletins presented alternately by a busty Norwegian in her native tongue and a bouncing dwarf.

The BBC must have looked at these developments with admiration and irritation. The story of the corporation in recent years is its attempt to step out of Auntie’s ankle-length, fustian skirts and reveal youthful, high-stepping, fishnet-stockinged legs around which fantasies are woven. But sadly for such ambitions, the BBC is under contract to receive its weather forecasts from the Met Office, the only organisation in the UK to take the business of climatic prediction seriously.

So, while ITV’s daytime viewers receive their atmospheric misinformation from giggling, tongue-tied, accident-prone blondes, the best the BBC can offer is Michael Fish and Suzanne Charlton, who, though bald and pert respectively, somehow fail to stir.

But who could have guessed that behind the BBC’s bland and efficient delivery of scientific guesswork there lay a climate of fear and loathing? Worse still, who could have imagined that Bill Giles, the bespectacled, avuncular head of the Weather Centre team, is in truth a beastly tyrant before whose minatory gaze strong men wilt and females whimper?

Well, according to reports, Giles and his henchman, editor-in-chief of weather broadcasting John Teather, rule their fiefdom by fear. The allegations have been investigated by John Bradford, a Met Office executive, who concludes there is a case to answer. “Bullying and harassment are defined as serious misconduct,” he says. “Bill should therefore be charged with serious misconduct.”

The most damaging allegations centre on the cases of weathermen Richard Edgar and David Lee. Edgar’s alleged offence was to have appeared with a pop group on Blue Peter where he used old-fashioned magnetic cloud symbols instead of modern technology. As punishment, Giles is said to have removed him from prime-time broadcasts, a deprivation which has left Edgar so distressed that he is unable to perform any kind of work and avoids a nervous breakdown only through tending his allotment. Lee lodged a separate claim of victimisation, saying he snapped after being told by Giles that his days of presenting weather forecasts on BBC1 were over.

Most damaging of all, Bradford says he and his colleagues have been swamped by weather presenters who “need shoulders to cry on”, and that they feel obliged to give counselling to the distressed TV stars.

All this must leave the BBC wailing and gnashing and chewing a carpet soaked in bitter tears. For beneath its reddened eyes there is being enacted a real-life drama of such emotional intensity that could not but fail to grip the audience. Who wants to watch ersatz, blood-soaked frenzies in concocted casualty wards when, behind the back-lit scene of a genuine weather map, there lurks an egomaniacal monster in whose unforgiving thrall underlings tremble?

And who, given the opportunity to see sobbing on the shoulders of hardened Met Office veterans, men and women from whom the prize of telling the nation about the clouds of tomorrow had been cruelly snatched, would not think the licence fee a paltry price of admission? As for the counselling, that would be a treat in itself.

The subtext, the inner message for which all connoisseurs of the drama seek is that, for all its obvious faults, television is scrupulously egalitarian. It rots – with no regard to status, background, intelligence, sensibility, breeding or social class – the minds both of those who watch it and those who perform on it.

I do not know whether the allegations made against Giles are true or not, but I am prepared to wager that before he became enmeshed in television he would have been able to gaze upon an old-fashioned magnetic cloud symbol and its digitally wrought counterpart and see them both for what they are.