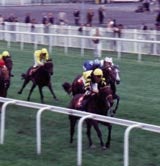 The Tote, the Government-owned pool betting organisation, is looking for a marketing director after the current director, Ric Cowan, resigned.

The Government had already announced plans to privatise the Tote when Cowan joined in 2000. But it appears that the Tote will stay in government hands. Cowan says: “I’ve done everything I wanted to do, bar working on the privatisation, which is out of our control. It’s time to move on.”

The Tote’s advertising spend is about &£3m. It uses through-the-line agency AMV Advance, and PHD for media buying.

The Tote operates 400 high street bookmakers. Last year its turnover was about &£643m.

BT has been slammed by the Independent Television Commission (ITC) over an ad for its BT Together telephone call package. The ad, created by Abbott Mead Vickers.BBDO, shows a man visiting his doctor with his head tilted to one side. The doctor diagnoses “BT Together” and viewers see a waiting room full of men with […]

Boots is to start selling fitness equipment, along with a range of exclusive products that include weight-management foods and organic snacks, in 100 of its larger stores. Analysts have been expecting Boots to unveil a range of products to replace the gifts and electrical items that the retailer removed from its stores some time ago. […]

Cutting bulk sales is not enough to impress media buyers – the broadsheet needs to prove it is putting that saved revenue to good use, says Olly Joyce