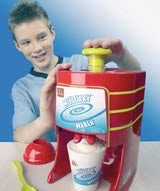 Vivid Imaginations will launch a McDonald’s McFlurry Maker in the summer, after forming a partnership with US toy company Spinmaster, which owns the licensing rights.

The McDonald’s McFlurry Maker toy comes with McDonald’s ingredients to enable children to make McFlurry ice creams at home. It will be in shops from July and will cost about £20.

The launch will be accompanied by a national TV and PR campaign.

Vivid is aiming to sell more than 250,000 McFlurry Makers in the seven-month period from July to the end of the year, equivalent to sales of £5m.

The McDonald’s McFlurry Maker forms part of Vivid’s “Food Fun” product line and will be followed by a Marshmallow Maker and a Way-Cool Slushy Maker. These will be supported by TV campaigns and each will sell at £14.99.

In the US, Spinmaster offers an Ice Maker and Hershey’s Chocolate Magic toy. The company unveiled the McDonald’s McFlurry Maker last month at the American International Toy Fair.