The unusual step follows a recall of up to 1.8 million vehicles over an accelerator pedal fault.

The car marque used the video sharing website in an attempt to restore trust in the brand and avoid damage to its reputation. Reports estimate the damage to the brand could cost it as much as £4bn worldwide.

On the YouTube video, Lentz says: “I hope you will give us a chance to win back your trust.” 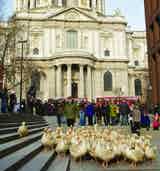 T-Mobile is to launch a new television advertisement, showing a flock of geese being driven through the City of London. The ad aims to highlight “outdated silly rules that can be tackled through relevant offers.

The backlash against Toyota’s car recall crisis is building across the world after the marque has been ordered by Japan’s Ministry of Transportation to investigate a rash of consumer complaints about braking problems.