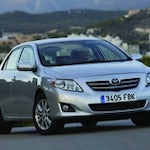 The models affected are the Corolla and Matrix made between 2005 and 2008. The fault could see engines stalling while being driven.

The Japanese carmaker says three unconfirmed accidents were “alleged to be related” to the problem, one of which resulted in a “minor injury.

Toyota, which has recalled more than 10 million vehicles globally, is trying to restore public confidence in its brand after a series of safety scares over its cars.

The latest problem with what Toyota calls the models’ engine control module may result in a crack in solder points or on some electronic componentry.

If a crack appears, the engine may not start or, “in limited instances, the engine could stop while the vehicle is being driven”, the carmaker says.

“This recall is an example of our commitment to standing by our products and being responsive to our customers,” says Steve St Angelo, Toyota’s chief quality officer for North America. “Our goal is to help ensure that Toyota drivers are completely confident in the safety and reliability of their vehicles.”

In July, Toyota began rolling out its “Your Toyota is My Toyota” advertising campaign, which features real employees championing the marque following its global recall crisis.

The campaign includes a TV ad and full-page press ads fronted by staff from Toyota Manufacturing UK, promising to “pick up imperfections that are smaller than a human hair.”