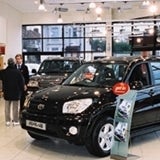 Toyota continues to go from strength to strength on the world stage but, after 13 years of consecutive sales growth, the brand has had a difficult start to 2006 in the UK.

Sales were down more than 10% to the end of April, according to the Society of Motor Manufacturers and Traders, and the GB division’s long-serving managing director Graham Smith is rumoured to be considering a new role with Toyota Europe (MW last week).

Commercial director Paul Philpott attributes the slow start to the run-out of old models ahead of the recent launches of the Yaris and the RAV4. He also points out that the market as a whole – down 5.5% for the first four months of this year – is struggling to replicate the success of recent years, and says: “The economic conditions that have affected the high street have impacted the car market in a similar way, and we’ve got to box smarter to increase market share.”

However, a source close to the company adds: “Historically, Toyota has always been up at this stage and, internally, it is worried that this might be the first year in a long time when it doesn’t outstrip the previous year’s sales.”

The source thinks Toyota’s marketing activity has been affected by the ambiguity of having two agencies on its pan-European roster. Saatchi &amp; Saatchi has long been Toyota’s global agency of record, but Clemmow Hornby Inge (CHI) won the pan-European launches of the Aygo and Yaris in 2005. CHI also won Toyota’s tactical advertising business at the start of this year – the first time it had been appointed by Toyota GB.

“The work is disjointed because it’s coming from two different agencies,” says the source. “I think Toyota has got to resolve the situation, and the obvious answer is to get rid of Saatchi &amp; Saatchi, because that agency seems to have run its course.”

Toyota’s global position remains incredibly strong. Already the world’s most profitable carmaker and soon to be the largest, it has just reported its fourth successive record profit. In Europe, the brand has a market share of about 5.2% (5% in the UK), putting it ahead of the likes of Fiat and Mercedes.

Professor Garel Rhys, director of the Centre for Automotive Research, thinks Toyota’s problems in the UK are just a blip, and predicts it will eventually catch the likes of Renault and Volkswagen, which have 10% market shares in Europe for their individual brands.

However, Rhys says: “If you want to be around the 13% or 14% mark in Europe you need more than one brand, like PSA [with Peugeot and Citroen] or Volkswagen [which also owns Audi, Skoda and Seat]. Toyota has Daihatsu but that’s not really a strong brand in Europe, and Lexus, which is a good brand but has a tiny market share. If Toyota has a weakness it’s that the group is dominated by the Toyota name. For a long time General Motors had 50% of the US market but that was with a large number of brands.”

Mike Moran, Toyota GB’s former commercial director, believes the company – which he describes as “inexorable” – is well positioned to get back on track. “Toyotas are without doubt the best cars on the market,” he says.

“It has got the best strategy with environmentally friendly products, and it’s designing increasingly attractive cars. After so many years of growth, to find it hard to make the next volume breakthrough is understandable. It’s a fantastic brand, and the company has got the financial resources to support growth as it goes forward. This is only a blip and not the start of a lasting decline.”