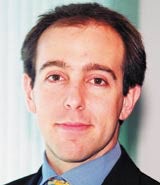 Total online advertising spend grew to &£196.7m in 2002, up 18.7 per cent year on year from &£165.7m, according to figures published by the Interactive Advertising Bureau (IAB) and PricewaterhouseCoopers (PwC).

The research measures the industry based on recorded revenues reported by the finance departments of online media owners – excluding production costs. It claims to be the only authoritative financial source for the size of the UK market and has always been used as the definitive source by the ad industry.

The 2002 total spend figure reveals that online’s market share increased to 1.4 per cent of total media spend – up from 1.2 per cent in 2001. This suggests the industry is on track to reach the IAB’s target of two per cent of UK advertising spend by autumn 2004. Notably, in the fourth quarter of 2002, online market share peaked at 1.7 per cent, with levels of spend even greater than at the height of the dot-com boom.

The IAB says online has returned to its place as the fastest-growing medium, growing three times faster than the industry as a whole and faster than any other marketing channel. IAB chairman Richard Eyre says: “Advertisers’ use of the Web has been trailing that of customers. The catch up has begun.”

The growth has come from a significant increase in the number of traditional advertisers turning to the Net as a complementary brand-building addition to media schedules. According to the leading online media owners, more than half of all online advertising is generated by traditional advertisers – suggesting the industry has crossed a threshold. Financial services in particular doubled spend in 2002, while automotive and packaged goods brands made significant gains.

The biggest driver for revenues is the perception that online is no longer a risk and is proven to deliver. Advertisers are increasing the breadth of their online activity as they recognise the value of innovative ad products and tools to build schedules. Advertisers realise that online works and are investing more.

The early days of internet advertising as an experimental or research medium are over, as is the hype, which has been replaced by the secure foundations for long-term growth.

More than half the UK population is online (source: NOP), and advertisers recognise that online is the third-most popular medium, accounting for 12 per cent of media consumption (Fishbowl Research).

Online is established as a complementary marketing tool that is proven to work on a mixed media schedule. While static banner ad formats still account for the largest portion of online spend, the industry’s investment in a broader range of products has paid off. A new digital media mix has emerged to include paid-for listings (Search Marketing), sponsorships, tenancies, nested content, and interstitials.

IAB chief executive Danny Meadows-Klue says: “We’re on track. The figures are heartening news and a wake-up call for marketers who see a website as the end of their online presence. Following contraction in the advertising industry in 2001, the 2002 figures prove that online has bounced back. Smart marketers know that the Net is not a fad and are seeing the value of brand-building, integrated campaigns that complement other media activity.”

Paul Pilkington, a senior manager at PwC who oversees the research, adds: “The rate of growth in 2002 represents a stunning return to form for UK internet advertising. The UK’s online advertising industry is larger and more diverse than it has ever been.”

Yahoo! UK &amp; Ireland managing director Fru Hazlitt is also encouraged by the findings: “It’s magnificent to see such steady growth over the past six quarters, but even more significant that the industry has recovered since the events of 2000.”

Carl White, European managing director of online ad specialist Valueclick, says the online ad industry “turned a corner in 2002. The improved range of advertiser opportunities and pricing models, allied with an industry that has become more professional in its trading, has all contributed to a healthy outlook.”

Scottish Courage says there is much demand for its new wine-based drink, Bliss, as the packaged spirits sector is in decline. But the industry doubts RTD is the right way for the brewery to boost its flagging fortunes. By Sonoo Singh The UK’s largest brewer Scottish Courage is on a mission to fill up its […]