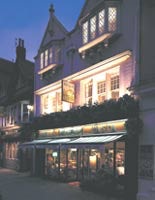 Tragus’ &£25m acquisition includes the Café Rouge and Bella Pasta brands, among others. Chief executive Finlay Scott, who headed coffee shop chain Aroma before its sale to McDonald’s in March 1999, says there are no immediate plans to appoint an advertising agency, but Tragus is looking for a consultancy to carry out work on the brands.

Pound was formerly marketing manager at Aroma. Aroma was sold to Caffe Nero in March for &£2.15m.

Tragus intends to develop Café Rouge and Bella Pasta as family brands. Plans include the creation of all-day menus for Café Rouge.

Whitbread’s sale of the business follows a review of the restaurant division in October 2001 and a focus on its core restaurant brands, such as Pizza Hut.

Whitbread marketing director Katherine Young previously had responsibility for the brands, but left in February.

The brands have no recorded advertising spend since the third quarter of 2000 (AC Nielsen MMS). Whitbread confirmed its agencies of record are Ignition for Bella Pasta and Keen Design for Café Rouge. Media planning and buying is by Austin West Media.

Bhs owner Philip Green provides marketers with a salutary lesson. It is not one of success leading to bonuses of &£180m, rather that marketing is as much about service and quality of product as communication and brand promise. In an age when the marketing community is obsessed with being able to cut through communications clutter […]