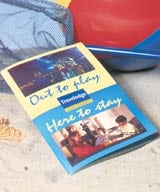 Travelodge, the UK budget hotel chain, has restructured its sales and marketing department in an effort to put more emphasis on its core brand.

Sales and marketing director Peter Halsey becomes marketing director, with specific responsibility for building the brand. The sales director role is being taken by Stuart Honey, who joins Travelodge from a senior international role at Choice Hotels.

Halsey says the move has been planned over the past 18 months, since Travelodge was split from the Forte Hotel Group by its owner, the food service giant Compass Group, when Forte was sold to Nomura. Halsey says: “Many of the functions we had in place were left over from when we were part of a much bigger group.”

Travelodge has 12,000 beds in more than 220 hotels across the UK. Last year it spent &£1m, with media buying by Feather Brooksbank and creative work in house and through small specialist agencies. Halsey says there are plans to increase the budget and to spend more on branding campaigns in the press and on radio, rather than just tactical work. He is also not ruling out a return to TV.

Halsey is to look at strategic expansion possibilities for the hotel chain, as well as at brand management and advertising. A customer research programme is being conducted by Taylor Nelson.

Gillette is reviewing its $408m (£274.5m) global media planning and buying account for the first time in more than a decade. The review involves three agencies – the two incumbents OMD and Universal McCann, and non-roster agency MindShare. The company says it opened the review to WPP Group-owned MindShare, following its “long-standing relationship with its […]

OK, so we’ve got the World Cup, we’ve had the Golden Jubilee, but there is another special family, all but overshadowed by football and royal fever – the Osbournes. No, I don’t mean your old headmaster’s family – I mean Ozzy, the old-time rock legend, not-so-reformed alcoholic and lead singer of Black Sabbath. A documentary […]

UK-based large-format outdoor advertising company Mega Profile has teamed up with nine similar companies in different countries to offer advertisers access to the first international network of giant poster sites. The consortium will be called Mega Group and will be managed by Mega Profile International’s managing director Sam Cook. The move echoes attempts by outdoor […]