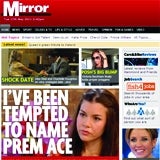 Chris Ellis will be responsible for growing the publisher’s digital portfolio, including the websites and mobile applications for the Daily Mirror and the People. He will report to the nationals division’s managing director Mark Hollinshead.

For the 17 weeks to 1 May digital revenues in the publisher’s nationals division dropped 9%, partly due to the continued decline in income from its Bingo site.

Ellis held the role of European chief operating officer at MySpace for two years, joining shortly after News Corporation’s acquisition of the social network. He was responsible for advertising, business development and operations.

He has also held senior roles at AOL and BT.

The Daily Mirror was the only tabloid title to report a circulation increase last month, boosted by the royal wedding coverage. The newspaper was up 1.46% month on month to 1,172,785, but is down 5.76% year on year.