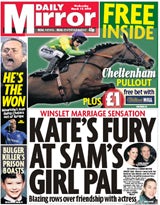 However, it is now making the position redundant and is in consultation with Fraser. Marketing responsibilities are being devolved back to the UK Nationals and Scottish Nationals divisions.

During the restructure Shane Davidson takes responsibility for UK Nationals and Jackie McGuigan for Scottish Nationals. They will report directly to managing director of nationals Mark Hollinshead.

The publisher recently reported a drop in pre-tax profit of 41.5% to £72.7m but says that, unlike competitors, it has pursued a policy “of not chasing short-term circulation volume through cover price discounting and levels of marketing spend which do not provide a return on investment.”