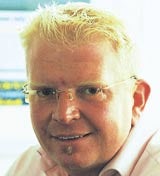 A former marketing director for The Sun and the News of The World, Watson will become managing director of Menzies Distribution in September.

Watson was recruited as Mirror Group Newspapers general manager from his position as managing director at television production company Celador International in 2003 (MW March 15, 2003). He was one of the first appointments made by Trinity Mirror chief executive Sly Bailey, who then promoted him to managing director of national newspapers at Trinity Mirror in May last year.

Insiders say that he wants to spend more time with his Scotland-based family, and the John Menzies position is based in Edinburgh, though there is speculation that “company politics” led to his departure.

Watson has presided over a number of upheavals at MGN including the departure of director of advertising Clare Dove in February (MW February 24).

Menzies Distribution is a national distributor of newspapers and magazines and also provides marketing services for publishers. Watson replaces Iain Callaghan, who is due to retire.