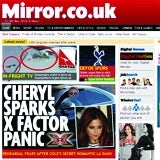 The new unit, which will sit within the existing nationals division, will see current head of digital Paul Hood take up the role of digital product and marketing director, and previously departing head of digital content Matt Kelly will now remain as publisher of nationals digital.

The nationals digital unit will be responsible for developing new and existing digital products and services, with the aim of accelerating digital revenue growth. Trinity Mirror’s national brands include the Daily Mirror, Sunday Mirror and Daily Record. ABCe figures for September for Mirror Group showed the number of average daily unique browsers has hovered around the 0.55m mark, with an increase of 5.26% on August

In September, digital sports broadcaster Perform appointed Kelly to the newly created role of MD of publishing. He was due to start in January.

In August, Trinity Mirror restructured its regionals division, resulting in the redundancy of its regionals digital director Chris Bunyan and the creation of two new roles: digital commercial director and LocalMole general manager.

David Black’s role is in consultation, the publisher says.