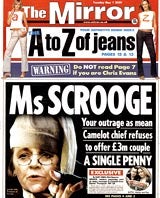 Trinity Mirror is looking for a marketing director, covering all its major titles, following the departure of Margaret Harvey.

Harvey, who has worked at the newspaper group for over four years, left her post last week without another job to go to.

Harvey was originally marketing director for the Independent, then owned by the Mirror Group.

Since joining the company, Harvey has overseen the group’s &£13m advertising spend.

Harvey says: “The decision was mutual.”

In 2000, Mirror Group was taken over by Trinity.