The companies have exchanged contracts and the acquisition strengthens Trinity Mirror’s position in regional media.

GMG Regional Media, which publishes 32 newspapers and associated websites, is made up of two operating businesses: MEN Media and S&B Media.

Trinity Mirror will not be acquiring Channel M, the TV station for Greater Manchester and the two local newspapers in Woking.

The businesses made an operating profit of zero pounds in the 12 months to December 2009 and have gross assets of £8.7 million. The total consideration is £44.8 million.

Sly Bailey, Chief Executive, says: “GMG Regional Media is a perfect strategic fit for our Group. This acquisition, which includes the Manchester Evening News with its proud and rich journalistic heritage, together with the weekly titles and associated websites extends our reach across print and online and is a further step towards our strategic goal of creating a multi-media business of real scale.”

Carolyn McCall, GMG chief executive, adds: “GMG is mandated to secure the future of the Guardian in perpetuity, and we have a strong portfolio which has to be in the right shape to achieve that goal. The Group board and the Scott Trust have made the decision to sell in light of these strategic objectives. GMG Regional Media is a good business and a publisher of important newspapers. However, we believe Trinity Mirror, as the UK’s biggest regional publisher, is best placed to develop this business. This is an agreement that delivers real value for both parties.”

GMG has undertaken a strategic review of all its operations and has just relaunched The Observer as a slimmed down newspaper, dropping the majority of its monthly supplements. 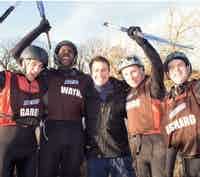 Commonwealth Games England (CGE), the organisation responsible for selecting and organising England’s team at the Games, has signed Adidas as its first major sponsor.