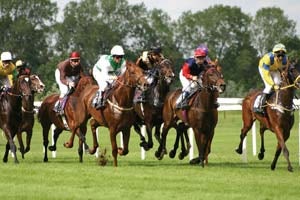 The long-running battle between bookmakers and Turf TV is heading for court after mediation talks broke down. A trial date of 28 April has been scheduled to settle claims of anti-competitiveness and collusion.

It is understood that last ditch talks are scheduled for the first week in April but an out-of-court agreement is not expected to be reached.

The row began in 2006 after 31 racecourses, including Ascot, Aintree, Epsom and Cheltenham, entered into an agreement with Alphameric, a company that supplies betting systems to all the major bookmakers. The joint venture developed Turf TV in an attempt to gain greater control over the racecourses’ picture rights.

The deal ended a 20-year monopoly on racecourse pictures by Satellite Information Services (SIS), a company part-owned by Ladbrokes, William Hill and The Tote.

The largest bookmakers initially refused to sign up to the service but in the last 3 months Ladbrokes and William Hill reached agreements with Turf TV, following a climb down by Gala Coral (MW 10 January).