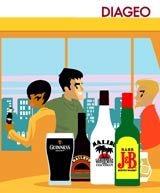 The gradual consolidation of global drinks brands took another tortuous turn last week when the Federal Trade Commission in the US blocked Diageo and Pernod-Ricard’s joint $8.15bn (£5.61bn) takeover of the Seagram wine and spirits business from Vivendi Universal.

The FTC ruled that the deal would give Diageo a monopolistic position in the distribution of rum in the US, as it would add Seagram’s Captain Morgan – number two in the US market – to Diageo’s Malibu, the third biggest brand. Bacardi, owned by Bacardi-Martini, is number one in the US market and also dominates the global rum market with a 72 per cent market share (source: AC Nielsen).

While Diageo will have to sell one of the brands (it will probably try to offload Malibu) before the FTC allows the deal to go through, this may turn out to be a minor hiccup in the redistribution of global spirits brands.

A more fundamental question is whether the new-look Diageo, which plans to divest its food interests (Pillsbury and Burger King) and concentrate solely on premium drinks, will find a pot of gold at the end of the rainbow.

will be the biggest player in a mature market that is in gradual decline. Between 1995 and 2000 global spirits sales volumes fell by 1.1 per cent to 21.7 billion litres, according to research company Canadean. But Diageo chief executive Paul Walsh believes that by concentrating on the premium end of the market it can create added-value new products and boost sales of top-of-the-range spirits.

One industry insider says: “I think it will be some time before we know how Diageo’s strategy is going to pan out. The Pillsbury and Burger King disposals are still not resolved. The sale of Burger King is going to take an enormous amount of time, primarily because of the franchisees. The chain has about 10,000 franchisees and anything Diageo does has to get the approval of franchise holders. Burger King also faces immense competition from McDonald’s and has not been performing particularly well, so it may prove difficult to find a buyer.”

In truth, Diageo’s decision to sell Pillsbury (with its Pillsbury, Green Giant, HÃ¤agen-Dazs and Old El Paso brands) to General Mills – which will probably sell HÃ¤agen-Dazs to joint-venture partner NestlÃ© – and divest itself of the troublesome Burger King is part of a stock market trend away from diversified conglomerates.

In recent years, investors have put pressure on large companies to become global specialists rather than jacks of all trades. It is thought that this will concentrate management skills and clarify investment options.

But there is some concern that Diageo is making too much of its success in premium drinks over the past two years – which has owed much to the buoyant world economy – and assuming this will continue in the face of an economic downturn.

As one Diageo critic says: “I would question the long-term growth potential of a company which moves from being a conglomerate with lots of diverse interests to being a business focused purely on high-value drinks. The alcoholic drinks market is not a high-growth industry – the only way to grow is to take market share from someone else. It has been proven with the objections from the FTC in the US that Diageo will find it very difficult to acquire any more brands, because it will be blocked by the competition rules. Even the Seagram acquisition has had to be split with the French.”

But others believe global drinks trends favour Diageo. Drinks analyst Alan Gray of ING Barings Charterhouse Securities says: “There are growth and cost benefits to come – Diageo can sell the acquired brands through its own distribution network.”

Gray points to strong sales from several of Diageo’s eight “priority” brands, volume sales of which together grew by six per cent in the year to the end of June, significantly outperforming the spirits market as a whole. J&B was up by two per cent, Baileys by ten per cent, Malibu by 20 per cent and Smirnoff by 12 per cent – the latter driven by sales of Smirnoff Ice, which was launched in the US this year.

Only Jose Cuervo tequila has declined, down six per cent due to a shortage of agave, the raw material for tequila. Gray points out that even Scotch whisky, which has been in decline for some years, has performed well in the past year, with exports up and Spain taking over from the US as the largest export market. Gray accepts that much of this is down to the strong economy, but does not believe any downturn will last much beyond the first half of next year.

One of Diageo’s greatest hopes lies in the development of ready-to-drink (RTD) versions of its premium spirits. If it can repeat the success of Smirnoff Ice, Diageo will be in clover. RTDs appeal to young people put off by traditional ways of drinking spirits. The hope is that, once these consumers mature, they will move on to the core brands.

Apart from Smirnoff Ice, sold in 15 countries, Diageo’s RTD brands in the UK include Smirnoff Mule, Gordon’s &amp; Tonic, Pimms &amp; Lemonade and Archers Aqua. J&B Twist, a mixture of blended whisky and citrus flavours, is sold in Spain and Portugal while rm mix Bundaberg &amp; Cola is popular in Australia, where Johnnie Walker &amp; Cola and Smirnoff Baltik are also available. Gordon’s Space, containing gin, lemon juice and ginseng, is sold in Greece. Diageo is reported to be planning a RTD version of Captain Morgan (if it manages to keep hold of the brand) and claims that spin-off products reinvigorate rather than cannibalise sales of the parent brands.

However, the critic quoted earlier says: “Growth in the alcoholic drinks sector is going to come mainly from innovation and brand extensions into RTD products like Smirnoff Ice. To be fair, Diageo does have a pretty hefty innovation agenda when it comes to developing formats in which its brands can be consumed. But while this has worked very well for Smirnoff it is questionable whether that kind of extension will work for some other brands, where the core brand is not as strong.”

While RTDs are a fashion-led market, Canadean analyst Ray Rowlands sees it as a long-term category. Alcopops, which came onto the market in 1996 with the launch of Hooper’s Hooch and Two Dogs, were quite a short-lived phenomenon – sales were already slipping by 1997 – but they prepared the market for premium packaged spirits (PPS) such as Smirnoff Ice and Bacardi Breezer.

Rowlands does not envisage the PPS category following alcopops into extinction, although he sees the rate of growth slowing for a few years when Smirnoff Ice reaches a plateau.

He adds that a product has to have the right brand image if it is to succeed in the RTD market: “Bacardi Breezer and Smirnoff Ice both have attractive brand images and strong names. But in five years’ time brands may be dead and flavour may be moving the market. For multinational companies it is a question of finding the right product for the right time and, as the market evolves, the tricky thing is finding the right product.”

Diageo says it is also looking for growth from its wine businesses – it will acquire a number of wine producers from Seagram. Stockbroker Merrill Lynch says US wine consumption grew by 9.2 per cent in 2000, and believes this trend will continue, as the biggest consumers of wine in the US are aged between 40 and 64, and the baby boomer generation is moving into prime wine-drinking age. The 40 to 64 age group comprised 26 per cent of the US population in 1990, but is forecast to account for 33 per cent by 2010.

Still, some observers argue that the wine market requires a completely different set of skills from Diageo’s brand business, and that it is a highly fragmented – though consolidating – market. Wine is more about vintage than brand, say the critics, so there would be little transfer of skills in the Seagram acquisition.

Not much profit in pints

Merrill Lynch analyst Phil Hawkins suggests that Diageo may even seek to build up its brewing business in the medium term, through acquisitions or partnerships. But a rival pours scorn on this: “The beer market has been static for ten years, while spirits are growing in value though they have not necessarily grown in volume. Other than the fact that it could get some level of cost-cutting in distribution, buying a brewer is not a particularly wise idea.”

It is impossible to predict the exact outcome of the FTC’s investigation into the Seagram acquisition, although Diageo will probably be forced to offload either Malibu or Captain Morgan. The situation is blurred further because the ownership of Captain Morgan is under dispute: Allied Domecq has signed an alliance with Destileria Serralles, a Puerto Rican distillery that claims to have first refusal over the brand if there is a change in ownership.

There are question marks over the outlook for Diageo, in a world where economic uncertainties abound. Much of its success or otherwise will depend on the basic skills of marketing – well-timed innovation, informed analysis of social and demographic trends and leveraging strong distribution, particularly in the US.