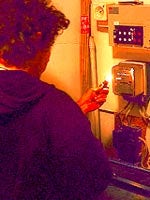 Competition in the deregulated gas and electricity industries appears to be going off the boil. According to figures from industry regulator Ofgem, the number of domestic customers switching utility supplier has fallen dramatically in the past six months.

The savings of up to 20 per cent a year (according to Ofgem) to be gained by changing supplier is insufficient to stir many people to action.

An Ofgem spokesman says: “The slowdown in the rate of switching energy suppliers could be due to the time of the year, when people are busy doing other things.” But autumn is the time of greatest marketing in energy as people prepare for a cold winter.

But if supply switching is tapering off – and the rules of marketing would dictate that those most likely to switch will do so early – it leaves utility companies with an uncertain future. Many have invested a great deal of time and money in trying to attract customers.

One City analyst says: “The million-dollar question for most [utility] companies is: ‘What now?’. It started with a price war and aggressive branding. Then came offers like dual fuel. This was followed by the utility companies diversifying themselves as multi-utilities and offering everything from energy to telecoms and even financial services. They will have to think of something else to attract attention now.”

However, most utility companies are concentrating on increasing marketing and advertising spends.

PowerGen, perceived as one of the last entrants in the open energy market, last week unveiled its latest &£10m advertising campaign portraying it as the “transformation from generator to customer-focused integrated energy company”.

Companies such as TXU Europe, which owns Norweb Energi and Eastern Energy, and Scottish Power are also reported to be reassessing their marketing strategies and are reviewing their advertising agencies as well as budgets.

PowerGen marketing director John Evans says: “The new quirky advertising for the brand is intended to bring the brand nearer to the people. It is just a way to generate interest in a low-interest market and also sustain our customer base of 3 million”.

Most energy companies agree that diversifying the utility brands is the only way to keep customers in the long-run. The high-volume investment and low margins in the gas and electricity industries is driving them into high-margin sectors such as financial services.

Richard Bainbridge, managing partner at Miller Bainbridge – the agency behind the new PowerGen campaign – says: “In a deregulated market there is always the initial scramble for offer-led, price-driven wallpaper advertising, a catalyst to customer churn and even promiscuity. But our new campaign will not just be a campaign. It will be service driven. After all, there is no need to be just a big dusty utility company.”

British Gas last year unveiled the launch of its telecoms services under the British Gas brand, with an estimated &£10m push. The group marketing director of British Gas parent Centrica, Simon Waugh, defends the “heavyweight” use of marketing and says: “We measure very, very closely the value that we get from our marketing expenditures and we do know what our costs are for acquiring new customers.”

ScottishPower, which claims to supply energy to one in every five homes in the UK, admits that it has not invested “substantially” in branding exercises. The company says it spends &£4m to &£6m each year on gas and electricity advertising, about &£2m to &£4m on retail and &£5m to &£10m on brand advertising.

ScottishPower brand development and marketing services manager Kevin Toner, says: “Hist orically, utility companies have always advertised in the autumn, since this is the time when heating and hot water are most required”.

Branding is still an issue for companies such as ScottishPower and Yorkshire Electricity, and creating a recognisable and a familiar name outside local areas is a goal yet to be achieved.

There are other issues, too. In California the deregulation of utilities has collapsed in chaos. Two companies have been unable to supply electricity because of huge debts, meaning widespread power cuts across the state in the past week. Could it happen in the UK?

An Ofgem spokesman says: “In the UK we have 30 per cent more generating capacity than we need. It is a situation quite unlike that in California”.

Ian French, a City analyst at Frank &amp; Sullivan feels there is a lesson to be learned from the Californian crisis. “We are close to the edge and any rapid increase in the demand for energy could result in a black-out, but it’s not a reason to panic at the moment,” he says.

Ofgem may well have avoided a crisis such as that in California, but the prospects for UK energy companies seem uncertain. They could struggle to gain more customers and then they will have to depend on selling more products to their existing customers. It would seem that customer-relationship marketing is now their only option.

Camelot has set itself some ambitious targets for its next licence period. Could on-ticket advertising and sponsorship be the key?

Well we looked, and we rather think we have. I refer to the new campaign for the Australian tourist commission and Singapore airlines by D’Arcy promoting unusual destinations. “Well great minds” as they say, think alike, because only a month earlier the Nexus/H-generated campaign for the Suzuki Grand Vitara also began. It too promotes unusual […]

Capitalism is undoubtedly exploitative. While protesters take the moral high ground, it’s up to marketers to highlight the positive aspects of business