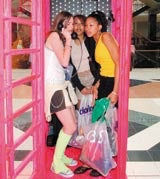 Mother has created a TV and radio campaign for EMAP’s weekly teen gossip title Sneak. The month-long campaign breaks on July 20 and will introduce a phone booth which will appear in shopping malls around the country where readers will be offered bits of gossip from the latest copy of the magazine. A series of cameras will be hidden in the Sneak Phone Booths to capture the instant reactions to the ‘hottest gossip in town’. The TV ad has been directed by Jason Collier, who has directed music videos for artists such as Moby and Mel C. The campaign will also be supported by a retail marketing initiative across UK high street and independent stores. Retailers will be receiving Sneak-branded goods including a fan, cool bag and point of sale material. Media is bought by Starcom Motive.

Life assurance and pensions company Friends Provident has appointed brand communications agency Marketplace to redesign its corporate identity. Friends Provident says Marketplace will look at advertising, direct mail, product literature and online communications. The appointment was overseen by the Haystack Group. The company is keen to play down suggestions of a rebranding, although last year […]

The Diary is aware that not all manufacturers are enamoured of those who distribute their products: the Territorial Army is still trying to clear up the Wiltshire countryside after last year’s packaged-goods makers versus supermarkets paintballing competition. Most companies, however, would balk at trying to kill those who are, after all, merely the next step […]

Underwear companies must cultivate loyalty among the UK’s increasingly brand promiscuous women if they are to boost sales, says Caroline Parry