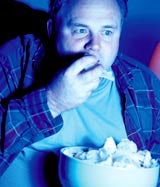 Consumers consider television to be the most informative, entertaining or interesting advertising medium, when compared with newspaper and magazine, poster or Internet advertising.

Research by The Chartered Institute of Marketing (CIM) reveals that traditional commercial television remains the most effective media channel for communicating with consumers.

Some 67 per cent of respondents cited TV as the most successful media by this criterion. Even the small number of consumers sampled who did not own a television or had “light” viewing rated TV as the most informative and entertaining advertising medium.

According to the CIM research, only six per cent of respondents had not seen any TV advertising during the previous week. This compares with more than 70 per cent for digital television ads, mobile phone advertising messages and Internet banner ads.

The research also showed that consumers are three times as likely to respond to TV advertising than messages delivered by other individual media.

Terrestrial television seems to fare particularly well among certain consumer segments. Households with children are almost ten per cent more likely to recall seeing more than 50 TV ads than those without.

Variations also emerge between readers of different classifications of newspapers. Only 14 per cent of broadsheet-reading respondents remember seeing more than 50 TV ads in the seven days prior to the sample compared with 27 per cent of tabloid readers.

The study shows that direct mail is the second most remembered media channel for advertising. Less than 20 per cent of consumers failed to recall receiving a single piece of direct mail in the week before the survey. Some 62 per cent recalled receiving up to ten direct mail items.

Regional variations were even more strongly pronounced here, with 79 per cent of respondents in the West Midlands remembering receiving direct mail as opposed to 52 percent in the North of England.

Newspaper and magazine ads are the third best remembered media channel for advertising, with posters fourth. The benefits of using unusual ambient media have managed to edge posters narrowly ahead of radio, which comes fifth.

The survey also asked the respondents about their media intake during the 24 hours preceding the research. Only 35 per cent had seen newspaper or magazine ads in that time. Direct mail and radio ads had both been noticed by 25 per cent of those surveyed.

Only six per cent had seen a digital TV ad and a mere two per cent had received a commercial message on their mobile phone in the 24 hours prior to the survey.

These attitudes towards different types of advertising go some way to explain the lack of exploitation of new media by advertisers. Out of the new media channels, digital television fared best, with one per cent of respondents saying its advertising was the most informative, entertaining or interesting. Some 18 per cent of readers of broadsheets consider newspaper or magazine ads as the most entertaining or interesting advertising medium.

The highest scoring new media channel, in terms of ease of use, is Internet banner ads. It may not be rated highly for entertainment or interest, but the comfort of accessing it simply through a click of a button has an obvious impact on the consumers. Consumers cite banners as being twice as likely as digital TV ads to make them respond.

Some media are more effective for encouraging response, while others are better at generating awareness. While some media might have advantages over others, consumers consider television as the most dominant advertising force.