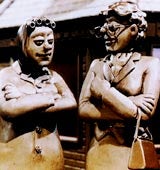 Television sponsorship is now an accepted part of the media mix in the UK, but it still has a long way to go to reach the degree of on-air exposure seen in other countries.

Last year, the TV sponsorship market in the UK last year was worth between &£90m and &£95m, of which ITV took 66 per cent. In the past, the medium has experienced annual growth of between ten and 15 per cent, but industry experts are divided as to whether the market will grow this year – although some believe it could be worth as much as &£120m. There is general agreement that TV sponsorship has been affected by the economic downturn, but not as badly as spot advertising.

Even if the market’s value does increase next year, there is little prospect of TV sponsorship expanding to US levels, where virtually every programme is sponsored – often simultaneously by a host of different sponsors.

Granada Enterprises sponsorship and licensing director Martin Lowde says: “The US market is simply about building awareness, whereas here it is also about affinity with the programme that is being sponsored.”

The Independent Television Commission’s (ITC) Code of Programme Sponsorship specifies that sponsorship credits must create a link between the sponsor and the programme.

He makes the point that viewers are more likely to remember the name of a sponsor than the first brand to be advertised in the centre-break of the same programme.

Where there is a close fit between the sponsor brand and programme – and when the credits are well-executed and the sponsorship is undertaken over a considerable time period rather than a short burst – viewers come to associate the programme with the sponsor.

The biggest success story in the UK is Cadbury’s association with Coronation Street. However, when a programme has a high turnover of sponsors, it is harder for a new sponsor to establish an association with the show. In some cases, it is arguably beneficial periodically to run a programme unsponsored for a time.

Research on Who Wants to Be a Millionaire?, conducted through OMD’s Snapshot online research tool last year (MW April 26) showed that only 17 per cent of respondents correctly identified the programme’s then sponsor as Alliance &amp; Leicester. A&L was the show’s fourth sponsor. Thirteen per cent of respondents thought the show was still sponsored by previous sponsor NTL, and seven per cent thought it was associated with the sponsor before that, Jacob’s Cream Crackers.

There is no guarantee that a sponsor will be able to break through the clutter of ads and on-air programme trailers so that viewers come to closely associate the brand with the programme.

The quality of the sponsorship credits helps, says IDS sponsorship controller Guy Martin: “There is no point in buying up a great sponsorship vehicle and not doing it justice in terms of production values and creativity.”

Travelex’s sponsorship credits for ITV’s World Cup coverage, created at relatively short notice (MW April 25), are having to compete with the strong production values of advertisers such as Nike and Carling, as well as event sponsors, which are given exposure on pitch-side hoardings.

Sponsorship creativity has been boosted by changes in the Code of Programme Sponsorship in 2000, which allowed products to be featured in sponsorship credits provided they help to reflect the link between sponsor and programme. Still forbidden are references to benefits or prices of products; direct exhortations to buy or rent the product; and extracts from advertising campaigns.

Canter believes that there is room to move the rules on, but warns against any relaxation that would allow sponsorship credits to become like “wallpaper”, as in the US.

The industry had been expecting a significant increase in demand for sponsorship as a consequence of the rule changes. Although the changes have helped companies such as soft drink manufacturer T&T Beverages – which might not have sponsored Popstars for its UK product launch had it not been able to put its drinks on air – that growth in the market has not materialised.

Lowde says: “The change in rules has coincided with the overall downturn in the economy.”

According to observers, the gap between the price of sponsorship – once considered a poor relation to advertising – and the equivalent media value of air-time is closing, although cost savings through sponsorship can still be as high as 50 per cent.

For those brands prepared to take a risk on an untested property, the benefits can be great, as Southern Comfort and T&T, with their tie-ups with Big Brother and Popstars respectively, have found out.

But even with a fixed sponsorship, the brand can suffer at the hands of schedulers. Nestlé Rowntree gave up Quality Street’s sponsorship of ITV’s “blockbuster movie” series after it failed to deliver the Friday night “Quality Moment”, because the films tended to be scheduled on other days of the week.

Brands and TV buyers are concerned that a lot of energy is invested in bidding for properties that they are not guaranteed to acquire. In addition, they are often offered properties at relatively short notice with little time to create innovative sponsorship credits or to embark on off-air promotional support. While bids mean that the best possible price for a sponsorship is obtained, Lowde accepts that broadcasters need to be more open about forthcoming sponsorships.

This may help TV sponsorship, which is far from saturation, achieve its full potential.