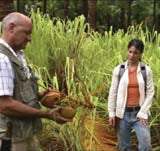 Confectionery companies are being courted by the makers of cult US drama Lost to buy the rights to a chocolate bar brand that is featured in the second series.

Industry insiders say that Touchstone Television, a subsidiary of Disney’s ABC, was forced to create the Apollo chocolate bar after it failed to sell a product placement spot for the bar.

But following the success of the series, which follows a group of plane crash survivors stranded on a desert island, Touchstone plans to sell the rights to a confectionery company to manufacture and distribute the bar.

The bar only made a fleeting appearance in the pilot episode but dominates a scene in the second series when one of the characters discovers a store of Apollo bars.

A range of Lost merchandise is already available in the US, including mugs, T-shirts, sports bottles and flight bags.

The series has been a hit for Channel 4, which spent over &£1m promoting it before it broadcast the first episode last August. It is understood that the second series will be shown later in the spring. It has already started in the US.