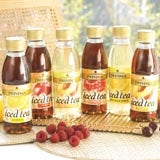 Twining claims the revamped Iced Tea range is so different from the previous one that it is treating the product as a new launch.

The new range launches on May 9, and will have a wider distribution than the previous one in an effort to increase sales among on-the-go consumers. It will be positioned as an upmarket drink for 25- to 65-year-olds.

The teas, priced at 89p each, will be available in 400ml bottles and are resealable for convenience. The first range, launched in 1995, was available in cardboard “cans” and had a limited range of flavours. The new teas come in six flavours including Green Tea with Lemon and Green Tea with Peach.

The launch will be supported by a significant marketing campaign that will include PR by The Clinton Partnership and a sampling programme, handled by field marketing agency Zac Facta. The teas will also benefit from a major television campaign planned for later this summer to promote the recently reorganised core Twinings tea range (MW March 10).

According to Twinings, the iced tea sector grew 15 per cent year on year last year and is worth over &£20m.