The figures revealed the micro-blogging site was the 27th most visited website in the week ending 29 August, one place higher than rival social media site MySpace.

The site may even be more popular because it’s increasingly accessed via third-party mobile and web-based apps, which Hitwise can’t measure.

Robin Goad, director of research at Hitwise, said, “If anything, Twitter is even more popular than our numbers imply because we’re only measuring traffic to the main Twitter site. If the people accessing their accounts via mobile phones and third-party applications were included, the numbers would be even higher. Of course, MySpace also picks up a significant amount of traffic outside of MySpace.com, particularly via mobile platforms.” 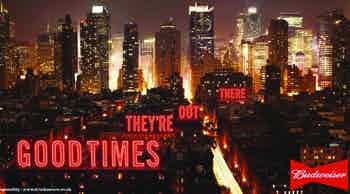 InBev UK has appointed DDB London to handle the Budweiser UK advertising account following the handing of the global advertising business to the DDB network.

It’s official – the country is not going to the dogs. Instead, it is going to the card table, roulette wheel, slot machines and even bingo. Online gaming continues to boom through the economic trough, with global revenues of $22 billion this year due to rise to $25 billion next year.