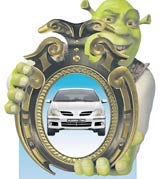 Joint branding, whether it be through sponsorship, products or co-promotions, is a popular activity. But participating brands should pay particular attention to design if the partnership is to work effectively and equitably.

Compatibility is about more than mere personalities getting on with each other. To make a relationship, whether personal or professional, last, the participants have to be prepared to work.

Laura Haynes, director of brand consultancy Appetite, says: “To be successful, partnerships must go beyond products or service. The core values of each partner must be taken into account. From the outset, it must be established what each party wants from the relationship.” If a relationship is to be profitable, it must also benefit customers. And design is intrinsic to any dialogue with customers.

Relationship Marketing International (RMI) chairman Chris Davis is one of the UK’s most experienced brand matchmakers. RMI carried out what is claimed to be the UK’s largest joint branding project, for Kimberly-Clark’s Huggies Club, which now has more than 30 brand partners. These range from toy company Tomy to disinfectant brand Dettol.

Davis says: “In our experience, bringing two brands together is akin to marriage. RMI effects the introduction, facilitates the courtship, provides the climate for conception and plays the role of nanny for the offspring.

“Brand partnering requires careful consideration by all parties, so RMI undertakes extensive research prior to the first partner meeting. This research is designed to establish the fit between the brands and the likelihood of brokering a lasting and mutually profitable partnership.”

RMI director of partnerships David Gilroy says: “By bringing related brands into the Huggies Club programme, the brand was able to talk to mothers with a higher degree of credibility and UK market share increased from 15 per cent in 1998, before the brand partnership was set up, to 32 per cent by 2001.”

Gilroy is keen to point out that there are strict creative design briefs which aim to deliver both Huggies’ and its partners’ brand objectives.

The Huggies Club is an illustration of how companies can work together without creating a new product. Sometimes, however, brands come together for a new product launch or to sponsor an event.

Gus Desbarats, whose company Alloy designs industrial products, says: “The most important thing when launching jointly branded products is for both parties to have a clear idea of where each is contributing to customers’ perception of value, so this can be clearly expressed.” He stresses that it is essential both brands grasp that, although to them the project may appear split between the companies involved, in the minds of customers, the experience demands a seamless integration between the two.

He continues: “The best results come when the brand partnership, its underlying logic and its marketing requirements are known to the industrial designer from the outset.”

Alloy asks questions to flush out the issues early, then adjusts its working model for project delivery to suit the politics of the particular relationship. Desbarats explains: “The core of the strategy is simple: we push, early on, for a full understanding of the business rationale for the collaboration, probe the nuances of the power hierarchy (collaborations are rarely between exact equals), make sure there is a clear ‘customer benefit story’ from the collaboration and, in the product design execution, constantly look for ways of expressing and delivering detailed ‘collaboration benefits’, to give depth and integrity to the exercise, beyond superficial markings.”

So how did this philosophy ensure Hewlett-Packard (HP) and Microsoft were represented effectively in the Jornada personal digital assistant, designed by Alloy?

Desbarats explains: “We factored in the companies’ marking requirements from the outset, looking for ‘equal but distinct’ locations for the HP and Microsoft Pocket PC logos. We did everything possible to ensure that our physical design offered users the most practically useful object with which to access Microsoft Pocket PC software.

“We try to assign logo positions linked to companies’ roles, so on the Jornada, the Pocket PC logo is near the screen and the HP badge is on the outer lid. When HP guidelines required the Jornada sub-brand to be located above the screen, we minimised the clash by making both marks a common neutral colour.”

Manchester-based integrated agency Tequila recently managed a tie-in between Nissan and DreamWorks’ animated film Shrek. Tequila was heavily involved in specifying the partner for Nissan, and its brand strategists did their homework on the compatibility of the brands involved and were then able to brief the in-house design team thoroughly.

“We ensured that both brands were sufficiently represented, by understanding their objectives from the start. Nissan’s was to engage families and get them interested in the car. DreamWorks’ was to encourage awareness of its film.”

From a design point of view, Tequila creative director Richard Sharp says the project was a tough one: “Combining Nissan’s European-Japanese identity with that of the cartoon character was difficult. However, strong brand guidelines from Nissan and flexibility from DreamWorks meant we could use Shrek sympathetically to meet our objectives.”

He who pays the piper

The most common area for joint branding is sponsorship. To be successful, sponsorship relies on a strong and appropriate relationship between the companies involved. However, far too often the sponsor – usually the party providing the financial support – dominates. This serves the needs of none of the parties concerned.

When design agency Coley Porter Bell began working with Swimathon, the annual fundraising swimming event set up by former Olympic swimmer Duncan Goodhew, BT had just pulled out as main sponsor. Creative director Stephen Bell says: “At this point, Swimathon didn’t have a brand. It had changed its visual identity each year, making BT the only constant element. Charities and charitable events are prone to this kind of branding mistake, although they are now becoming more brand-aware.”

Bell set up workshops to identify the “personality” of Swimathon and take a long-term view of the event. He explains: “We realised that we had to rebuild consumer recognition of the event and that Swimathon had to stand alone against any future sponsors, so that the mistakes of the past would not be repeated.”

Coley Porter Bell formulated a modern, sport-oriented look, moving away from the downmarket cartoon characters which had often been used in the past. Bell says: “There are many charities around, so it’s vital to deliver the right message both to the public and to prospective sponsors.”

Swimathon’s new branding has a stylish edge that many companies would be happy to be associated with. This look also helps its current sponsor, Butlins, to update its image, while Butlins’ traditional “family fun” values benefit Swimathon’s image.

Joint branding is becoming increasingly popular as companies wake up to the benefits of being associated with an appropriate business partner. So, when rebranding it is important to take possible future joint ventures into account, something which both Appetite’s Haynes and Rebecca Price, client director at brand consultancy Fitch:London, say they now do. Haynes says: “It’s important to build this element of flexibility into the strategy and look of a brand, as it is likely to be involved in a joint branding exercise in the future.”

Price says that companies have to face harsh commercial realities: “Although both parties need to benefit from a joint branding exercise, the company providing the most money often gets the biggest slice of the action. That’s why we often develop visual branding to cover a range of scenarios, so that even if a company is the subordinate brand its values will be effectively conveyed.”

As well as making sure a brand is adequately prepared for joint ventures, such planning also means that brands are able to display their potential as possible partners to other businesses it wishes to attract.

Just as a successful joint branding venture mirrors a successful marriage, with the parties working together for mutual benefit, neither can succeed until the right partner is found. It is vital to appeal to the right kind of people – and it certainly helps if you know how to present your assets.