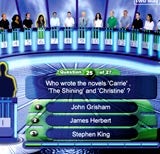 The cash comes from Swedish company SMI Media Invest, which is now a “significant” minority shareholder in Two Way TV and has two seats on the board. The new funds will support the continued roll-out of Two Way TV in the UK, across all digital platforms, including satellite.

Two Way TV (twowaytv.com) offers an interactive games channel which is featured on a number of digital cable and satellite networks around the world. In the UK, it is distributed to almost 1 million pay-per-play digital cable homes, including Telewest and NTL, and will soon be launched on digital terrestrial platform ONdigital.

The next step will see the deployment of new features that let viewers join in with game shows and sports events as they are broadcast from home.

In addition to pay-per-play revenues, Two Way TV is starting to attract big-name advertisers and sponsors such as Cadbury, Domino’s Pizza, and Sportal.

Two Way TV chief executive Simon Cornwell says: “Broadcasters around the world are focusing on the power of interactive games in building loyal audiences and new revenue streams. We will now be able to move forward at a steady, confident pace to break even.”

SMI Media Invest chief executive Michael Werner says: “Two Way TV is the world leader in interactive games for digital TV. Linked to our portfolio of companies, which are all leaders in digital TV technology and content, we believe Two Way TV will be perfectly positioned to capitalise rapidly on the fast-growing market for interactive TV.”

Two Way TV’s product portfolio includes arcade games, trivia challenges, word puzzles and observational games that are updated daily. Some games offer cash prizes and players pay to play. Popular TV shows such as the BBC’s A Question of Sport and Mastermind and Channel 4’s Fifteen to One and The Crystal Maze are also joining the channel as interactive games.

On paper, the advent of a global trading system has enormously increased the power and profitability of those companies best able to exploit economies of scale: the multinationals. And yet their reputations have become more vulnerable than ever before. This paradox has been all-too-evident in the events of the past few weeks. We have seen […]

Capital Radio has started the search for a new agency to handle its Â£5m advertising business.