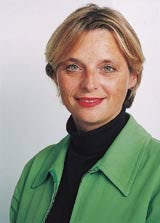 She replaces Will Carter, who becomes KP Foods managing director for crisps and snacks.

Muylaert will head a UK marketing team with responsibility for biscuit brands McVitie’s Digestive, Jaffa Cakes, Penguin, Go Ahead! and BN, which was recently introduced in the UK.

As marketing director for continental Europe, she was a member of UB’s power brand development team that worked to establish McVitie’s Digestive and BN as international biscuit brands. Her former role is now shared between team members Jude Bridge and Andy Weston-Webb, who report to Ed Jackson, managing director of development operations.

Jackson lost another member of his team in June when Mark Horgan, who was responsible for countlines, returned to Mars to handle its Mars Bar brand across Europe (MW June 10).

At KP Foods, Carter partially replaces Wynne Griffiths, who was director of KP Foods and has become chief executive at Young’s Bluecrest.

UB is understood to be selling its remaining frozen and chilled foods business to concentrate on biscuits and snacks.