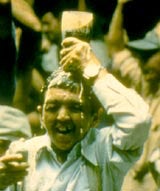 Malcolm is believed to have been chosen for the board level role ahead of Guinness global marketing chief Nick Fell.

The appointment will make Malcolm, who joined UDV last year from Procter &amp; Gamble, one of the most powerful figures in marketing, with a budget of more than &£700m.

Diageo this week announced the integration of its global beer and spirits business following the &£7bn sale of its Pillsbury food division to US rival General Mills. A spokesman denied reports that the merger will lead to large-scale redundancies, as most of restructuring across the two drinks’ businesses has already taken place. UDV’s brands include Johnnie Walker, Smirnoff and Gordon’s.

The company claims consumer insights gained across both drinks’ businesses will boost profits, but some insiders see the merger as a cosmetic exercise to impress the City.

One industry observer with links to UDV says: “There is a world of difference between what is essentially a one-product beer company and a diverse portfolio of spirits with a series of development brands. I can’t see where the savings can be made.”

A former Guinness insider says: “Diageo talks of synergy through consumer insights, but that is nonsense. Paul Walsh [Diageo’s new chief operating officer] is making these changes to show the City that something is being done about top-line growth.”