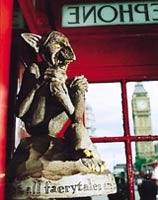 There are always lots of short, ugly men lurking around the streets of London – especially in Soho. But there seems to have been a lot more of them recently.

A spate of gnome-men have been sighted in parks and around landmarks in the capital and also in Edinburgh and Manchester. They are described as wrinkled and possessing evil grins. No, Robin Cook isn’t on the prowl, these are statuettes created to promote Once, the latest novel by James Herbert.

The creatures were strategically placed by agency Cunning Stunts. Rachael Laine, project manager for the company, says people have been unnerved by the figures, although why anybody would be unnerved by a plastic gargoyle on a plinth is anyone’s guess.