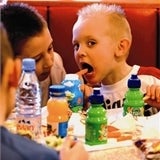 Lobby groups from across Europe and the US have teamed up for the first time to call for an immediate ban on advertising to children. The groups have spoken out at the Good Practices: Action on Diet, Physical Activity and Health conference held in Brussels this week.

The groups, which include the European Heart Network, Berkeley Media Studies Group and the International Obesity Task Force, a brand on the promotion of junk food and on related health claims made on such products. It calls for the ban across TV, the internet and viral campaigns, mobile marketing and all forms of new media.

The calls come as the European Union votes on new legislation that will ban the use of health claims such as low fat. It will also introduce guidelines for claims made by functional food products. The moves are separate to initiatives by food companies in the UK to highlight nutritional information on the front of packs. The UK is reviewing advertising to children separately through broadcast regulator Ofcom. A consultation over a number of options to limit the volume of ads and times that they are shown is due to be completed on June 6. It is not clear if similar measures are being considered across other EU or US countries.

The health and nutrition claims legislation has seen nutrient profiling reintroduced despite concerns that it would lead to too many health claims being banned. The European Parliament voted to have the nutrient profiling clause deleted from the bill last year (MW June 5, 2005).