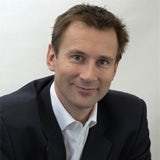 Hunt says £530m has been ring-fenced to help the digital economy over the next five years. This is made up of £230m saved from the digital switchover help scheme, and £150m a year from the BBC licence fee for two years from 2013.

Hunt adds that he recently visited technology companies in Silicon Valley about possible investment in the UK, which could take the form of assistance in developing the skills, software and infrastructure needed to improve the UK’s digital capacity.

Hunt was speaking at the launch of Google’s “Connected Kingdom” report, which estimates that the UK’s online economy is worth £100bn and makes up 7.2% of GDP.

The culture secretary says he recognises the “huge potential to boost UK creative industries” from a buoyant online economy.

Google’s report highlights that despite online growth, the UK has a lot of catching up to do in terms of broadband capacity and adoption.

The report states the Government needs to “ensure access to infrastructure that is ubiquitous, fast, reliable and secure, and remove barriers that prevent companies from transforming their business.”

The DCMS has pledged that the UK will have the “best broadband network in Europe by 2015”.

The culture secretary also announced that the DCMS plans to create a media and digital space in the Olympic Park in East London.