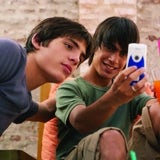 The findings were revealed in the research firm’s Mobile Youth Around the World study, and revealed that 46% of UK mobile users aged 15-24 had used the mobile internet within the past 30 days.

Downloading apps was the second most popular activity among the surveyed users, with a quarter of all respondents saying they did so in the past month.

“Among European youth, those in the UK are more likely to use mobile internet, with over 20% more usage than other European countries,” read the report.

By contrast, only 20% of German respondents in the same age bracket had used the mobile internet in the same time, compared to 21% in Spain and 24% in Italy.

Email and instant messaging were also popular, with 23% and 22% UK correspondents using them respectively during the surveyed period.