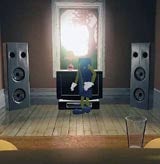 Since its launch three years ago, DVD has taken the UK by storm and, just as the CD spelled disaster for cassettes, DVD looks set to kill off vidoes

Digital versatile discs (DVDs) have been one of the most successful formats to be launched on the market, driven by new technologies and characterised by consumers’ strong demand for modern innovations in a desire to be one step ahead of the crowd.

Designed to offer enhanced visual quality, clearer images and improved sound, DVDs now account for 77 per cent of all audio-visual sales (DVDs and VHS formats), according to Taylor Nelson Sofres research. Not surprisingly, their popularity has been to the detriment of the VHS home video market.

With more than 102 million DVDs sold in the UK in the 12 months to March 2003, sales of DVDs have grown rapidly since their introduction to the market just three years ago, when only 23 million were sold in the first year. In just 12 months, DVDs have gained more than 60 per cent share of the audio-visual market, compared with 41 per cent a year ago. The result has been a decrease in the sales of videos, which fell in value from £689m in the year to March 2002 to £605m in the year to March 2003

The popularity of DVDs has also been reflected in substantial increases in rental figures. During March 2002, just 31 per cent of rentals were DVDs compared to 56 per cent in March 2003.

Not surprisingly, new releases – those released in the past six months – comprise the majority of sales for both DVDs and videos. However, catalogue productions form an important part of the audio-visual market and account for more than a third of sales.

The majority of DVDs tend to be bought by consumers in the C1 social bracket, yet the reduction in price of both DVDs and DVD players have made the market more accessible to consumers in the C2 and DE classes.

While the price of DVD hardware and software has dropped recently, the discrepancy in price between DVDs and VHS remains significant. In March 2003, the average cost of a new release on DVD was £15.34 compared to £10.61 for VHS – a difference of 30 per cent.

The price difference between the two formats may explain why parents are more likely to buy a DVD for themselves than for their children. Seventy-four per cent of all DVDs bought are films, with just nine per cent being children’s programmes. In contrast, more than half (56 per cent) of VHS productions are films and a fifth are children’s programmes. However, as the price of DVDs continues to come down and the format is bought in greater quantities, this pattern is likely to change.

Specialist retail outlets such as HMV and Virgin remain the preferred place to buy DVDs, yet online retailers and supermarkets have gained significant market share in recent years. Such outlets now account for ten per cent and 20 per cent of the market respectively, and purchases from these channels are likely to continue increasing.

DVDs are bought primarily for personal use. However in recent years, there has been a significant increase in the proportion of DVDs bought as gifts – from one-fifth (21 per cent) in 2001 to more than a third (35 per cent) in the 12 months to march 2003. This is probably due to the increasing number of households with DVD players and the number of DVDs sold as gifts is likely to match that of VHS sales.

With almost 40 per cent of audio-visual consumers opting to buy DVDs only, the market clearly poses a significant threat to the survival of VHS. While video players perform an important function in recording films and programmes screened on television, as the cost of recordable DVD players continues to come down the reliance on videos will diminish.

Just as audio cassettes have been gradually phased out through the introduction of CDs, DVDs look set to have a similar effect on videos as households opt to buy and rent DVD formats as a matter of course.

It will be interesting to see if manufacturers and distributors of VHS and video players are able to create a niche market for these products in the future, which appeal to particular consumer groups who are reluctant to buy new releases on DVD.

Lever Fabergé is to ditch Persil Liquid refills, a move certain to anger environmentalists who see the Tetra Pak cartons as less ecologically harmful than the core bottle version.