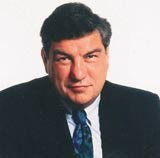 UKTV chief executive Dick Emery is to announce the launch of an experiment that will examine the effect of different break patterns on advertising recall at TV United 2003 in Bath today (Wednesday).

UKTV is teaming up with Billetts and a number of advertisers for the initiative. Emery will not be drawn on the details of the experiment, but it is expected that it will measure the effect of reductions in minutage, advertising spots, programme trailers and the number of breaks on advertising recall.

With the rise in popularity of digital TV, Emery believes that it is more important than ever for television to deliver products that attract and retain viewers if they are to be dissuaded from switching channels. He claims that the TV industry has been guilty of ignoring viewers’ opinions on ad breaks.

He says: “For years people have said ‘what I don’t like about commercial TV is the ads.’ And what have we done in response? We have increased the length of the breaks and the messages to make the situation worse.”

Also speaking at the conference, PHD Media’s brand planning director Louise Jones is to appeal to broadcasters to clear up clutter within ad breaks. She is expected to make a radical suggestion – reducing the number of spots by 20 per cent and increasing the cost of the spot by the same amount. She claims that media budgets would not increase, as research indicates that recall per spot and per pound spent would improve.

Your media analysis on digital radio (MW last week) was spot on in its assessment of the potential of DAB for advertisers, and the need for Rajar measurement of digital radio stations to demonstrate broadcaster confidence in the medium. I do, however, take issue with Mark Helm of MediaVest in his evaluation of the new […]

It would be no surprise to find Colin Hearn, worldwide head of Cordiant Communications’ direct and interactive operations, shortly following Peter Stead, chief executive of Fitch, its design division, to the exit – P45 in hand. Not that Hearn – who should not be confused with his namesake David, Cordiant’s chief executive – has done […]