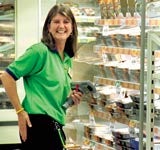 All broadcasters are faced with the challenge of preventing viewers from channel-hopping during the commercial break. It is a problem that, naturally, affects advertisers and is one that is sure to escalate as more viewers sign up to multi-channel television services.

Mike Smallwood, a consultant who managed the research project for UKTV, says: “There’s been an explosion in output on TV and now when an ad break comes up, viewers have as many as 350 options to consider during the break and are hopping between channels. This is becoming even more common, as with today’s technology it is easier for people to ignore the ad breaks.”

He says that the research – a quantitative study by Billetts, and two qualitative surveys – one by Blinc and the other by Carat and IDS – demonstrates that the “less is more” approach delivers results in terms of recall levels.

Smallwood claims the Billetts research shows a ten per cent increase in recall levels for ads in shorter breaks. While there was little change for “first in break” – which already has a higher-than-average recall level – there was a significant increase in recall levels for ads appearing in the second half of the break. Awareness gains were skewed towards female viewers and 16- to 34-year-old adults; two demographic groups highly prized by advertisers.

Blinc’s study, says Smallwood, shows an increase in recall from 55 per cent for a standard break with nine ads, to 77 per cent where the number of ads had been reduced to seven – but little change in recall levels for programme trailers.

Cutting the commercial minutage is a radical step for UKTV. Broadcasting regulations allow channels, apart from ITV1, Channel 4 and Five, to broadcast an average of nine minutes of spot advertising per hour of broadcasting in any one day. The terrestrial commercial channels are only allowed up to seven minutes.

Media Planning Group client services director Andrew Canter welcomes UKTV’s move, but points out that it merely brings the digital broadcaster in line with its terrestrial counterparts. UKTV hopes that by changing break patterns its channels will retain more viewers and improve the size and profile of their audiences. The broadcaster hopes that this in turn will mean advertisers value the spots more highly.

UKTV chief executive Dick Emery says: “All the work we have done demonstrates that we can increase the value of our airtime because recall will be significantly enhanced. What we now need to prove is the anecdotal evidence that audiences of commercial breaks can be increased to compensate for the loss of minutage. If we can do this, the price of airtime will simply reflect the demand – as has always been the case.”

UKTV’s move is similar to a solution suggested by PHD executive strategy director Louise Jones at last year’s Marketing Week TV United Conference, with a view to cleaning up breaks. Her proposal was for broadcasters to reduce spots by 20 per cent and to charge a corresponding price increase for them; the theory being clients would not have to boost their media spend as recall per spot and per pound spent would improve (MW May 1, 2003).

But MindShare director of investment Nick Theakstone says: “All of our clients want impact and to stand out in the crowd, but they all want good prices. The best way to keep people watching through the breaks is to improve the quality of the advertising.”

Steve Hobbs, media director at Carat, who was also involved in UKTV’s research, agrees that the quality of advertising should improve, but also the placing of it. The research, he says, shows that viewers distinguish between good and bad advertising and identify spots that have been poorly planned and do not fit with the programme environment.

But he adds: “The biggest finding in the research was that programme promotions, which everyone has historically perceived to be ‘clutter’, are seen by viewers as being positive and helpful in navigating their way around.”

Over the past few years, broadcasters have tried new ways of cleaning up breaks and removing clutter. They have squeezed programme credits to one side of the screen in order to use the other side to let viewers know what is coming up, or to run a trailer or a programme line-up. ITV marketing and commercial director Jim Hytner, who introduced a “next, then later” programme menu on ITV1, says: “It seems to have worked in terms of keeping audience.”

Understanding that viewers find programme trailers valuable and entertaining, he also plans to try placing programme promotions in the middle of the ad break.

“We won’t have a trailer at the beginning or the end of the break as that distracts viewers,” says Hytner. “We are trying to enhance the break for viewers and advertisers.”

But regulations tightly control what broadcasters are able to do in this area. The now-defunct Independent Television Commission stopped plans by Channel 4’s E4 to give viewers the chance to enter a competition by identifying a wordspelled out between the ads.Rufus Radcliffe, head of marketing at E4, says: “The ITC’s view was that it was blurring the lines between advertising and promotion and we were not allowed to do it.”

The channel has also run competitions on its showcase Thursday evenings, asking viewers to spot plot twists in shows such as Friends.

But Hytner does not believe that competitions will help the more popular channels, such as ITV1, to retain large audiences. He says that they will be overshadowed by competitions promoted by advertisers such as The Sun.

Flextech – which owns 50 per cent of UKTV – has used various devices designed to retain viewers during breaks on its own channels. Trouble’s Steve da Hamster appears at the beginning and end of a break cracking jokes and singing, while on-screen banners tell viewers what is coming up; and on FTN (Flextech Television Network) there are two continuity announcers chatting together instead of just one.

But Flextech creative director Kerry Taylor warns that UK broadcasters should be cautious about following in the footsteps of their US cousins, who can be accused of invading viewer’s space with such devices. Already, she says, there are viewers mounting campaigns on the Web to preserve their TV viewing space.

Taylor adds: “The big issue for broadcasters is that we have to put our viewer first, but at the same time we are operating in a multi-channel environment and you have to make yourself heard.”

As viewing patterns change, more broadcasters feel that the regulations governing on-air promotions are out of step with the multi- channel world. Observers say they need to be loosened so that broadcasters can devise ways to make commercial breaks more entertaining in order to retain viewers. Channel 4 marketing director Polly Cochrane says: “I think Ofcom is going to have to look at this whole area and review it.”

But in the meantime UKTV is hoping a reduction in the length of break junctions will help it to keep viewers and provide advertisers with improved cut-through.