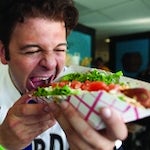 Both channels will be available on BSkyB in Q3 and Q4 respectively.

Good Food HD launches first on the 31 August and will be available in both formats from 5am -11pm. As part of the HD launch, Good Food has acquired and commissioned a raft of new content to support the launch, including a third series of Man v Food and Ronnie Corbett’s Supper Club.

Eden HD will launch in early October and will simulcast from 9am to 3am. The channel will add Great Rift and South Pacific to complement shows that include Life, Wild China and Planet Earth.