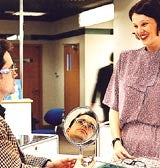 Laser eye clinic Ultralase is moving into the high street in a joint venture with 20/20 Optical Stores.

A clinic is to be opened in the 20/20 Optical Superstore in Oxford Street, London. If successful the idea will be rolled out to other stores across the country.

Ultralase recently appointed HDM Agency to its &£5m through-the-line account, after a three-way pitch through the AAR. The company has major national expansion plans.

The pitch, against AMV Advance and Cambridge-based Ware Anthony Rust, does not affect Ultralase’s media buying and planning business, which is held by Brilliant Independent Media Specialists.

Ultralase marketing manager Robin Jones says: “We intend to make Lasik optical surgery easily available in every major city throughout the UK, and we are backing up our words with an initial investment in excess of &£8m.”

Ultralase’s high street presence places it in direct competition with Boots Opticians, which announced last month it is to expand its laser eye clinics to a further five cities by the end of the year. Boots opened its first eye treatment centre in Regent Street, London, in December last year.

A landmark scheme, which aims to raise cash for schools through brand sponsorship, has reopened the ethical debate over marketing to children. Similar schemes in the US have met with harsh criticism. The question is, should the UK follow suit

Allied Bakeries’ marketing director, Frances Brindle, has left the company to join a dot-com start-up that provides healthcare services to blue-chip clients. Brindle recently quit the baking giant, which has brands including Allinson, Kingsmill and Mighty White, and has not been directly replaced. However, Allied has appointed a commercial director, Bart Della Mura, to oversee […]