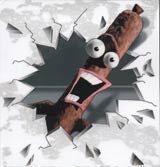 Unilever Bestfoods is overhauling meat snack range Peperami with the launch of new variants and a significant increase in marketing spend. It will include resurrecting the brand’s “It’s a bit of an animal” campaign.

The company plans to introduce up to five new variants of the snack, including a miniature Peperami and a version in a roll, and it is also renaming the spicy variant Peperami FireStick. The new products will be launched in stores imminently.

Unilever is understood to have significantly increased its marketing spend to support the new products. It spent &£96,000 on the brand last year.

The “It’s a bit of an animal” campaign was created by Still Price Lintas, now Lowe, in 1993. It featured an aggressive, animated sausage that encouraged consumers to eat it. The new campaign has been created by Lowe.

The controversial campaign had several executions, including one in which the sausage rubbed its head against a cheese grater and another in which a half-eaten spicy version shouted at a consumer to come back and finish it.

The brand has run limited advertising in recent years, although it has been involved in tie-ups such as Peperami-flavoured Mini Cheddars.