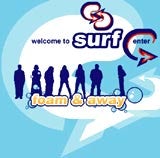 Unilever is launching its first interactive online soap opera under its Surf brand, called Foam &amp; Away. The move marks the brand’s debut on the Net.

Foam &amp; Away is designed to raise awareness of the brand among students across the UK, who will be invited to contribute to the storyline and take part in the filming. The first episode is due to be broadcast next week at www.surf.co.uk.

The move by Lever Bros brand Surf is a reminder of the days when soap manufacturers’ sponsorship of TV series coined the term soap opera.

The site was developed by Web design agency Wax New Media and is being overseen by Surf consumer brand manager Shahla Rushworth.

“The Net provides an ideal forum to communicate with a large group of potential consumers who will be choosing and using detergents for the first time,” says Rushworth.

“We aim to increase their awareness and encourage their loyalty by bringing the brand to life in a medium that is attractive and increasingly available to students,” she says.

Unilever will not reveal how much money it is putting behind Foam &amp; Away, but on- and offline promotions will take place at major universities, including sponsored foam parties.