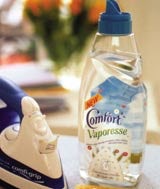 Unilever is extending its range of Comfort fabric conditioners by launching two luxury variants aimed at the top of the market.

Comfort CrÃ¨me, which launches at the end of January, backed by a &£3m television and press campaign, will be aimed at women who want an “indulgent” product.

It will be available in jojoba and almond oil variants, and will be sold in a clear plastic bottle with updated graphics to improve its shelf standout.

One industry source says: “It’s being aimed at the premium end of the market – mainly women who want something more upmarket and are prepared to pay more for a bit of difference.”

The launch is the latest in the UK’s &£275m fabric softener market, dominated by Unilever and Procter &amp; Gamble.

Comfort is the UK’s leading brand with a 45 per cent value share (Mintel), while Procter &amp; Gamble’s Lenor accounts for 33 per cent.

However, P&amp;G is ploughing &£5m into a new fabric conditioner under its Fairy brand (MW November 3, 2005), also due to reach supermarkets later this month.