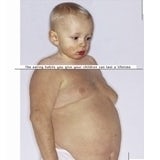 The posters feature a child’s head digitally grafted onto the body of an obese adult, and includes the caption: “The eating habits you give your children can last a lifetime.”

It claims that children as young as one year old are displaying early signs of coronary heart disease, and it suggests that parents should consult their doctor or health visitor to be given further dietary advice.

The posters will initially be put up in health centres, medical practices and other places where young mothers go for advice.

However, a spokesman for The Union said that a large-scale outdoor campaign was also being considered.

The NOF was established by medical practitioners in May 2000 to raise awareness about the increasing health dangers of being overweight or obese.