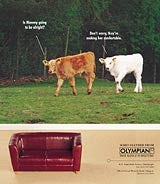 Animal lovers have complained to the Advertising Standards Authority (ASA) over a “distressing” poster ad for a leather furniture company, which shows that cows are made into leather sofas.

One of the posters features a calf in a field with the tagline, “Where’s daddy?” and shows a leather sofa on the bottom of the poster. The advertising campaign for the furniture company Olympian was created by Edinburgh-based agency The Union.

Another ad shows a calf saying to a cow: “Mummy your skin’s so soft” and the cow replies, “It’ll be the death of me.” At the bottom is shown another leather sofa. The campaign also includes a poster featuring one calf asking another: “Is Mummy all right?” while the other replies: “Yes, they are making her comfortable.”

The advertising watchdog says it is investigating three complaints.

A spokesman for the ad agency says: “We have used humour to tell a story to show how a quality leather settee gets into your house.”

Olympian has stores in Glasgow and Edinburgh.

The ASA has meanwhile upheld a complaint by Expedia against a press ad by rival online travel service Opodo. It claims Opodo beats average online airfares 85 per cent of the time. The advertising watchdog has asked Opodo not to repeat the claim. The campaign was created by Leagas Delaney.