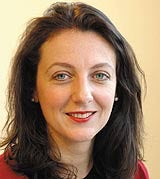 Uniq has promoted its marketing controller, Alison Arnold, to marketing director of its chilled convenience foods business. This follows the company’s sell-off of a number of brands including St Ivel’s Shape and Utterly Butterly.

As marketing controller for yogurts and desserts for St Ivel, Arnold headed the marketing team for Shape yogurt and oversaw its relaunch earlier this year. In her new position, she will handle the company’s licensed desserts and yogurts, including Cadbury and the Groovy Chick range, which launched in June.

Uniq has been undergoing a massive disposal programme over the past year, spearheaded chief executive Bill Ronald. He joined Uniq in February from Mars where he was the European vice-president. The company’s aim is to focus on sandwiches, salads, desserts and ready meals. As a result, it sold its Shape brand to Danone in August and its spreads range, which includes Utterly Butterly, to Dairy Crest last month.

St Ivel’s marketing department has been in a state of flux for more than a year. Last year, it made its marketing director Tony Lucas redundant after six years (MW November 29, 2001). In June, commercial director Mike Hodgson, who had assumed marketing responsibilities, left to become managing director of own-brand food manufacturer Greencore (MW June 13).