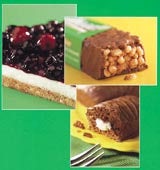 McVitie’s is recruiting a marketing controller to head its Cake Company team following the departure of James Turton.

Turton left to join Pretty Polly, where he replaced Sharon Harrison as marketing director. Harrison quit the hosiery and lingerie giant on July 1.

McVitie’s, part of United Biscuits, is understood to have reviewed its marketing team and decided to replace Turton.

McVitie’s Cake Company manufactures and markets products such as Go Ahead! and Jaffa Cakes muffins and flapjacks under the McVitie’s To Go brand name.

It also has the licence for Mars’ Galaxy and Milky Way cakes and has made M&M’s muffins. The tie-up with Mars marks the first time the confectionery giant has licensed its brands in the UK, and more product launches are expected.

Mars supplies the chocolate while McVitie’s has responsibility for manufacturing, marketing and sales.

The cakes were launched in 1999 with a &£4.5m marketing spend funded by McVitie’s, which keeps the revenue from sales.

Last year McVitie’s Cake Company had a 45 per cent share of the cake bar market in the UK, making it the leading brand. The company hopes to double turnover in the next five years.

WH Smith head of marketing Andy King has been snapped up by Mothercare as marketing director.

After being linked to the deaths of three Swedish adults, Red Bull is waiting for the all-clear to exonerate itself from blame.